You have no obligation to purchase the product once you know the price. You can simply remove the item from your cart.
SubiSpeed USDM F1 Style Rear Fog Light
0 / Review(s)
Categories
Stock
Brand
Rating

Make sure you are seen when using the brakes, by adding a F1 Fog light to your 2015-2020 Subaru WRX/STI from your number one supplier, SubiSpeed!

NOTE: SubiSpeed F1 Brake Lights have a dual intensity function. The fog light is dimmer than the brake light as a safety precaution for other motorists. This differentiates the SubiSpeed model from JDM counterparts such as Chargespeed.

This product is optional, however it will allow you to connect your Rear Fog Light swiftly and effortlessly. For more details on this product, click here

This item will allow you to wire your new light without tapping the factory wires. This speeds up the install and allows you to return your vehicle to a completely stock setup. For more details on this product, click here for the WRX / STI version and click here for the Crosstrek version.

This is the first complete lamp assembly for the 2015 WRX / STI that SubiSpeed is offering. This also works with the 13-17 Crosstrek. With a little work, we were able to develop a USDM F1 style rear fog lamp for this platform. It is produced in the same factory that the JDM version is manufactured, however it is built to our USDM specifications.

Since US vehicles lacked the rear fog light from the factory, they require additional wiring and mounting brackets vs JDM vehicles. Everything is included with this product.

As a bonus vs the stock Subaru rear fog, the brake function blinks quickly before becoming solid. This is what gives the lamp it's "F1 Style" name.

All LEDs are red.

Version 2 allows for a normal brake light OR F1 style brake light. There are a few ways this light can be setup:

Important: For our USDM model the brake light function IS brighter than the fog light function in this model. This makes it clear to other drivers whether or not you are braking or not.

This video does not reflect the improvements made to the USDM lamp once it went into full production as mentioned above. 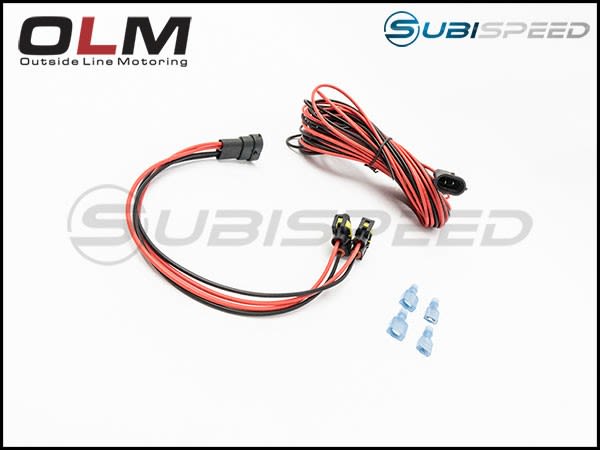 If you want to wire this so that it only comes on with the fog lights you'll find yourself using a pretty long run of wire.

We've made a quick connect kit which will split the wires to the passenger side fog light. Just run the wire under the driver's side fender liner, into the vehicle, and along the door sills back to the trunk of the vehicle. The insulated connectors will be placed on the F1 light harness and extension. Just connect them together and you'll have a functioning rear fog light.

Includes splitter and extension with two pairs of connectors. The plug for the female end is not pre-attached so that the wires can easily be run through grommets in the firewall area. To purchase this addition, click here.

This harness speeds up the install process. The stock wiring harness in the WRX / STI can be hard to crimp as the area is tight. Also owners who wish to return their setup to stock at any point and time can do so easily with this harness.

The harness has OEM style connectors on both ends which allows you to install this in-line with the factory wiring. 3 extensions allow you to connect the aftermarket fog / F1 lights. 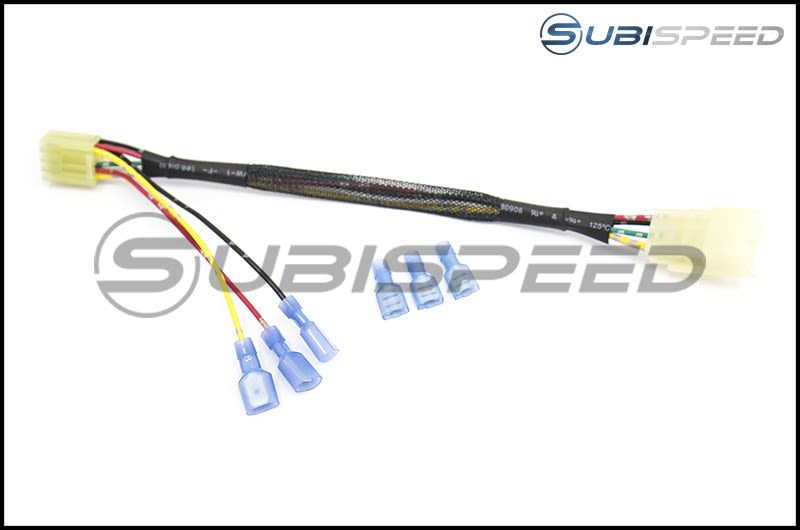 The bumper cover does not need to be removed in order to install this product. Simply undo the fasteners at the bottom of the bumper cover so you can gain enough access to knock out the factory plastic cap.

We highly recommend covering the lens of the new fog light casing with painter's tape or something similar during installation. This will prevent scratches while you maneuver it into position.

Our video will help your through the installation process. However, for reference, the OEM tail light wiring is as follows:

If you use the fog light extension harness, the negative and fog light wires will be supplied by that harness. You will only use the OEM tail light harness for the brown wire (brake light positive).

You can wire the lamp as a solid brake light only. You would do this by connecting the fog light wire (red) on the lamp to the brown wire on the OEM brake light wire (brown). It would be dimmer than the F1 style lamp though.

While many states allow brake lights that flash and then turn solid, some do not. Please refer to your local laws pertaining to this feature.

It is not required that you hook up the brake light wiring. You can run the product as a rear fog light only.

Average rating (based on 26 reviews)

No questions have been asked about this product.
x
Price:
Actual Price:
Our price is lower than the manufacturer's "minimum advertised price." As a result, we cannot show you the price in catalog or the product page.